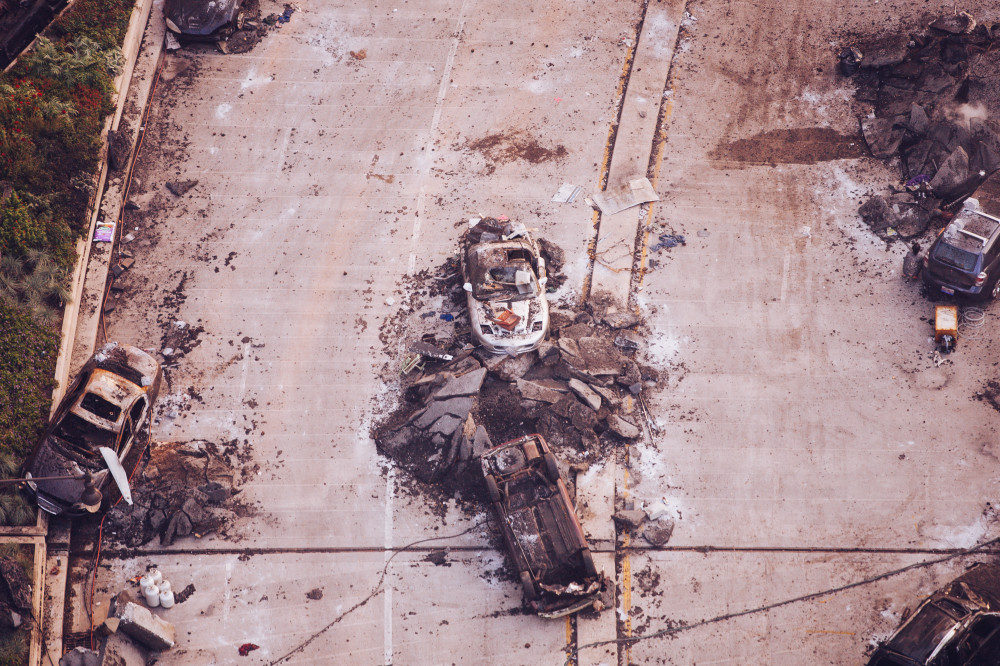 This is a photo that I took when we were in Chicago. This was our first trip to the windy city. We made a road trip from Nashville, TN to Chicago to celebrate Shayna’s (my wife’s) 30th birthday. As we are were turning onto Wacker Dr., the street where our hotel was, we noticed what seemed like a post-apocalyptic armageddon taking place in the streets of Chicago.

There were cops everywhere, people were lining the streets with their phones out taking pictures of what looked like explosions. There were incinerated cars twisted and turned upside down, and there was concrete rubble lining an entire city block and the tops of buildings were laying crumbled in the streets. Needless to say, WE WERE FREAKING OUT!!! We were sure that terrorists had attacked the city and we started searching on our iPhone immediately to see if there was anything on the news about what was going on. Of course there wasn’t anything on the news! It must have just happened, we thought! Holy crap we must have just driven into a terrorist attack.

Fortunately,there was a police officer on the corner directing traffic and I rolled down the window to ask him where we should go for shelter and protection from the terrorists. To my surprised he smiled at me and very calmly replied with a bit of a laugh, “Oh, this is just the set of the upcoming Transformers movie, now keep it moving.”

Relieved, we drove past the smoking piles of cars and debris and pulled into Hotel 71, which just happened to be directly in front of where they were filming on Wacker Drive. It was such a relief and such a cool first experience for us on our first trip into Chicago. The next morning when we woke up, it was all gone, as if it had never even happened. What a trip!